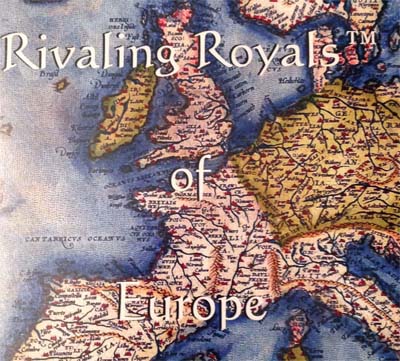 Stephen Schwartz of Curiosity Gaming sent me a copy of his card game "Rivaling Royals of Europe" to review. As it happens, I have a 14-year-old nephew who enjoys card games. He and my mother agreed to play the game with me to provide perspective from three generations of players.

Rivaling Royals of Europe is based on power struggles of Western European royals during the Middle Ages. The playing cards are divided into two decks, the Royalty Deck and the Nobility Deck. The game also includes yellow tokens representing money (gold), and a Regent card for each of the four countries in the game: England, France, Scotland, and Spain.

The game makes a good first impression. My nephew (let's call him Royal Apprentice) commented that the cards were well-made. My mother (aka Queen Mother) said the cards were nice-looking. I agree:

Each player starts with five Nobility cards. The Nobility deck includes City cards. Playing a City card allows the player to establish a city. The city can be protected with Troops cards and developed with Trade cards (Stone Mason, Weaver, etc.) A player can control multiple cities from any or all of the four countries in the game.

After player has a city with at least one developed trade, he/she can start drawing Royalty cards. The Royalty deck includes cards for the three types of thrones in the game — Bishop, Queen, and King. One of these cards can be placed above each city, establishing a throne in the city. But beware — if your city is not protected by Troops, your Bishop, Queen or King can be eliminated by another player using an Assassination card.

Other intriguing cards include Invasion, The Plague, Espionage (allowing one player to peek at some of another player's cards, or to help defend against Invasion), and Coronation Rite (allowing the player to go through the discard pile and select a Bishop, Queen, or King for a vacant city throne).

For the most part, the game is easy to figure out. You can start playing right away and look up rules for various cards as you go along. I was confused at first about how to establish a Regent because I forgot that each player represents not a single country but an alliance of cities from different countries. For example, although Royal Apprentice and I both controlled cities in France, he became France's Regent because he controlled more French cities than I did.

In fact, Royal Apprentice quickly controlled just about everything in the game, as he usually does in card games. "I'm having fun," he said. He wanted to make up his own rules because the game had captured his imagination, but Queen Mother and I decided to stick with the real rules.

In under an hour we had read through most of the rules and finished our first game. (Royal Apprentice, of course, won.) It would have taken less time if we hadn't stopped so often to talk about the history behind the game. I found myself explaining terms like "regency" and "secular" to my nephew, who listened without yawning.

Royal Apprentice did have one complaint about the game, which I promised to include in the review: "It's easy to lose chips. They should be easier to see if they fall on the floor."

Due to time constraints, we were only able to play this game once, but all three of us liked it a lot. Queen Mother commented, "I would play again. I want to see if I can do better next time." So the next time Royal Apprentice visits town, I think we will be playing this game again.

For more information about "Rivaling Royals of Europe," visit The Game Crafter.

Thank you to Stephen Schwartz for sending me the game, and thank you to Royal Apprentice and Queen Mother for helping me review it!